What Child is This? is an old Christmas carol, originally written by  William Chatterton Dix. Inspired from the poem “The Manger Song”, What Child is This? was published in Britain in 1865 but later become more popular in United States. The composer, Dix, was working in an insurance company as manager when he fell sick and suffered from spiritual crisis. That was when he was inspired to write a few hymns and carols in which some of the more popular ones are “Alleluia!  Sing to Jesus” and “As with Gladness, Men of Old”. 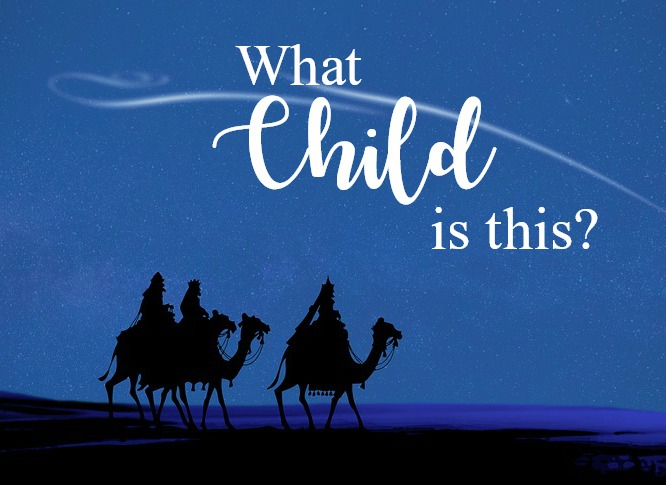 William Chatterton Dix was born on June 14, 1837 in Bristol. He was the son of John Dix, a surgeon and poet who wrote “The Life of Chatterton”. When he was 29, he suffered from a fatal illness which made him bedridden for several months. During this time, he suffered from depression. This led him to read Bible and inspired him to write hymns and songs. One of the most well-loved and memorable  songs of Dix is the What Child is This, a Christmas carol sung to the melody of Greensleeves.

According to Dr. Albert Bailey, a hymn specialist, Dix’s melodies are “sentimental”, but he say in overall, “his hymns are simple, reverent, sincere, imaginative, not above the average comprehension, and two of them at least have proved to be continuously serviceable.” 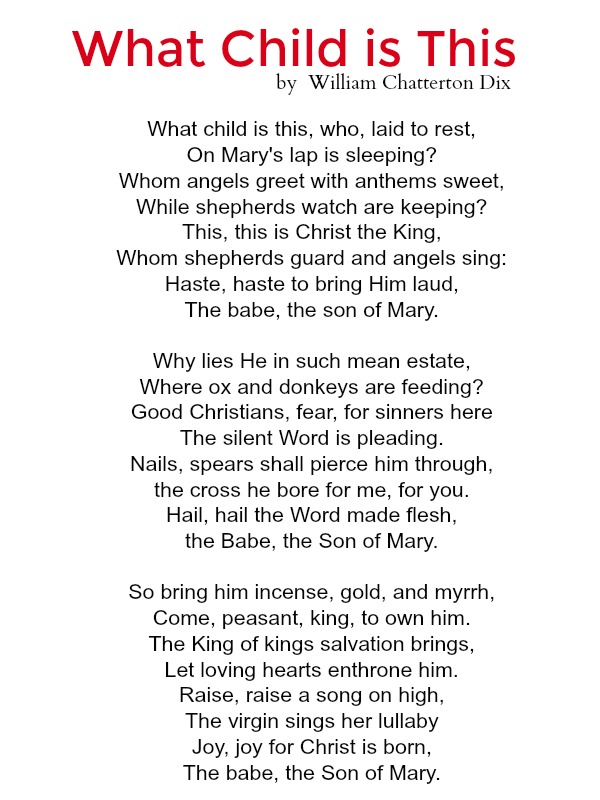 What Child is this Lyrics

What child is this, who, laid to rest,
On Mary’s lap is sleeping?
Whom angels greet with anthems sweet,
While shepherds watch are keeping?
This, this is Christ the King,
Whom shepherds guard and angels sing:
Haste, haste to bring Him laud,
The babe, the son of Mary.

Why lies He in such mean estate,
Where ox and donkeys are feeding?
Good Christians, fear, for sinners here
The silent Word is pleading.
Nails, spears shall pierce him through,
the cross he bore for me, for you.
Hail, hail the Word made flesh,
the Babe, the Son of Mary.

So bring him incense, gold, and myrrh,
Come, peasant, king, to own him.
The King of kings salvation brings,
Let loving hearts enthrone him.
Raise, raise a song on high,
The virgin sings her lullaby
Joy, joy for Christ is born,
The babe, the Son of Mary.

What Child is This Music Sheet

This song can be played using different instruments. For those who want to play this in piano, here’s a sample music sheet of What Child is This, basically the same tune as the Greensleeves. 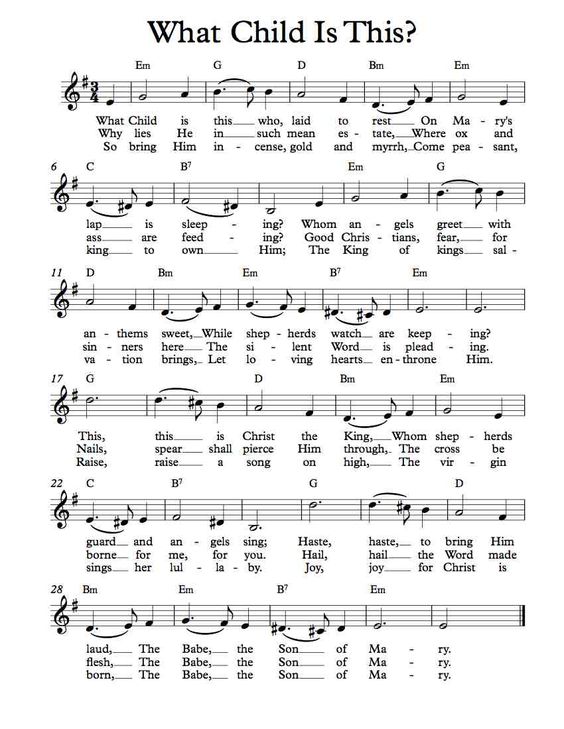 What Child is This Chords

For those who want to play this song in guitar, here’s a simplified version of this song’s chord. Starting with e minor, with D, G, Am, B and D#dim7, this is pretty easy to play. 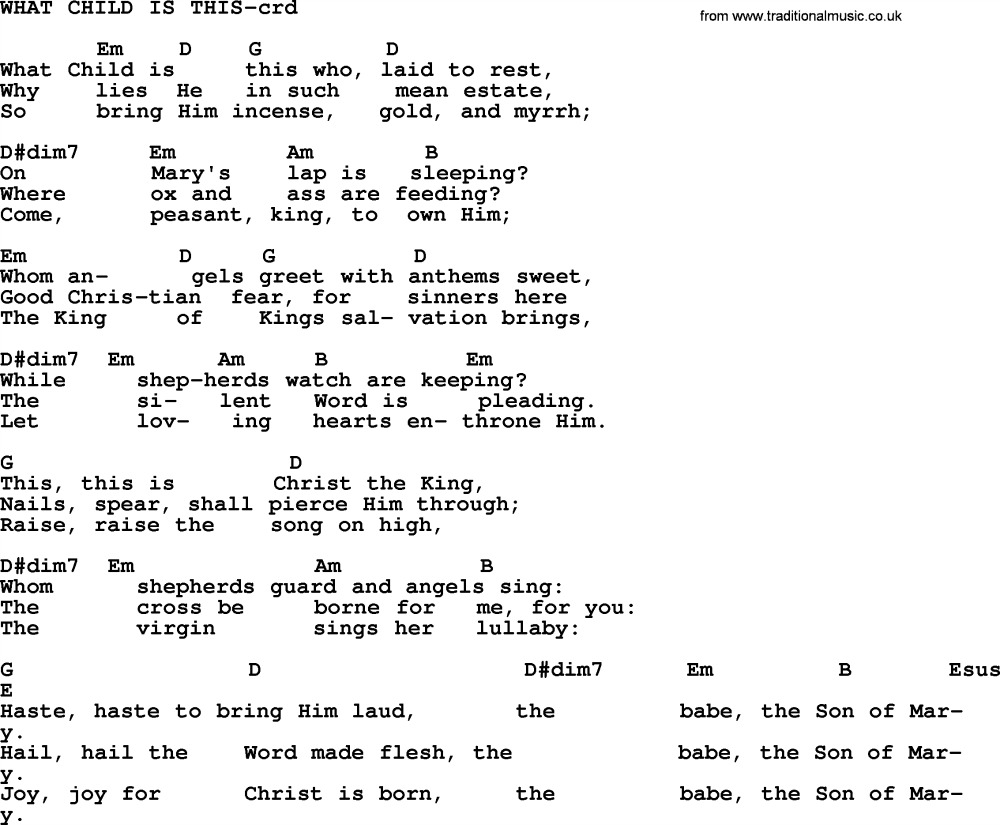 What Child is this Instrumental

This song has a beautiful, soulful melody that can make you feel emotional, almost nostalgic, especially on holiday. Here are two different versions of this song’s instrumental.

This English Christmas carol has several renditions. Josh Groban, Andrea Bocelli, Johnny Mathis, and Carrie Underwood are some of the most notable singers who have their own rendition of this song. Want to hear their versions of singing? I compiled the What Child is This Youtube videos of these popular singers and their performance singing this old carol.

What Child is This by: Josh Groban

Released on 2007, his version of this song sound so soulful and breathtaking. He gave justice to the meaning of song lyrics.

What Child is This by: Andrea Bocelli

A powerful and passionate rendition of What Child is this performed by Andrea Bocelli in The Kodak Theatre, United States in 2009.

What Child is This By: Johnny Mathis

Of all the versions of What child is This, John Mathis’ is probably one of the best, personally, at least. His voice is so deep, enticing and almost breathtaking.

What Child is This by: Carrie Underwood

You can definitely feel the deep meaning of the song with Carrie Underwood’s version.

What Child is This by: Martina McBride

Another popular personality who performed this song is Martina McBride, a soprano, country singer.