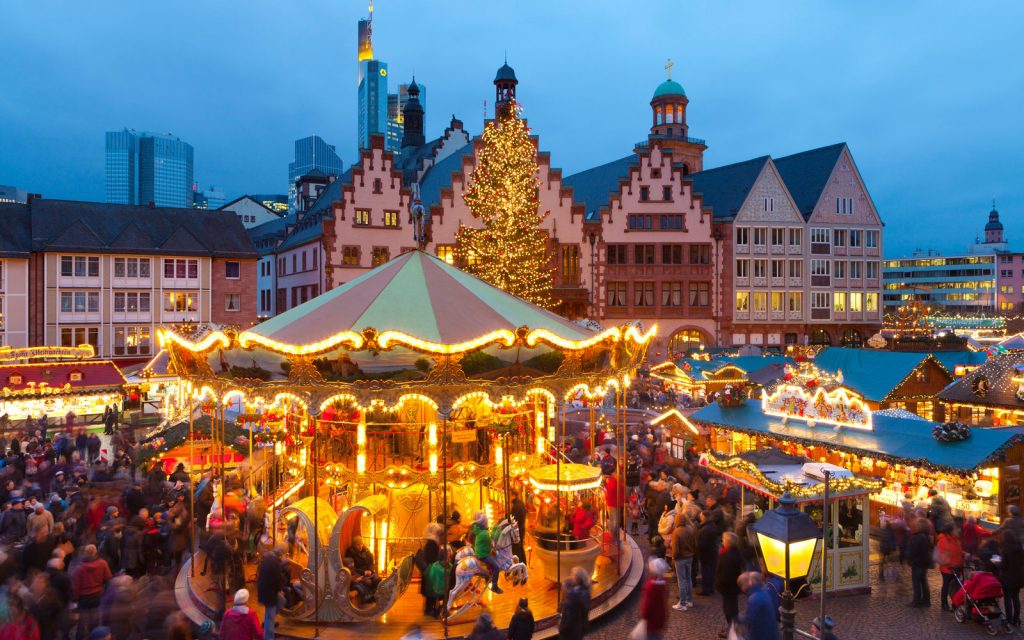 Christmas, known as Weihnachten in German is the most important of all the festivals in Germany. It’s the time for celebrations, introspection and spending quality time with friends and family. Not just the main day, but even weeks leading to Christmas involves several customs and traditions of diverse origin. Anglo-Saxon and German Christmas traditions are quite intricately linked, but there are a few notable differences worth exploring. In this article, we’ll discuss the Christmas traditions in Germany that makes this season wonderful and mysterious.

The Advent Of Christmas:

One of the most important part of German Christmas celebrations is the advent. Not one or two, but a plethora of Advent calendars or Adventskalendar are used in German homes. Apart from the traditional ones made of cards, there are even ones made out of wreaths of fir trees and decorated with 24 boxes. The bag or box contains a little present in it. Another type of advent calendar is “Advent Kranz”, which is a ring of fir branches with four candles in it. This advent calendar is similar to the one used in churches. One candle is lit at the start of each week in Advent.

The Christmas celebration in Germany begins on the 24th of December. Not just the house, but even towns, cities and villages are lit up in lights to welcome the season. Several town squares and city hall even have their own Christmas trees, beautifully decorated with lights and ornaments. The huge Christmas tree in front of the Brandenburg Gate is the highlight of the country.

Christmas trees are extremely important for German people. In fact, the Germans were the first one who brought the trend of Christmas trees, right during the Middle Ages. The Christmas tree is traditionally brought into the house on Christmas Eve, but some people get trees right on the advent of the Christmas season.

Initially, families would decorate their houses with just evergreen branches. But this custom eventually evolved into bringing home huge, evergreen trees. And by the 19th century, Christmas trees had become so popular that it even replaced the nativity scene as the focal point of Christmas festivities.  In earlier times, people would decorate their houses with silk flowers, gingerbread and red apples to give an appearance of a blooming winter. Today, people decorate their trees with ornaments, tinsels and lights. Some ornaments are more of heirloom pieces, handed down from generation to generation.

Some families even arrange a manger scene depicting the stable in which Jesus was born. Parents even place presents from Christ Child under the Christmas tree. Just after the sun sets, the excited children run to the room to see the beautifully lit Christmas tree.

Wooden frames, covered with plastic sheets with electric candles inside and placed in the windows to make the house looks all beautiful and well lit from the outside.

Christmas Angels, known as Weihnachtsengel in German are other popular Christmas decorations. These little wooden angels, hailing from Erzgebirge, these beautifully made wooden figurines depict the angels in cute and adorable poses. Angels playing with their musical instruments are most popular.

Secret presents are also exchanged at school and work places. The door is opened wide enough to throw the presents into the room. The presents are passed among people until each reaches the correct person. It’s believed that it would be bad luck to find out about the sender of the present.

Sankt Nikolaus is the German counterpart of Saint Nicholas. Unlike American Santa Claus, Sankt Nikolaus does not come down the chimney or drive a sleigh. He comes home normally and even comes face to face with children. Sankt Nikolaus then asks the kids if they have been nice or naughty. There’s no point lying as Sankt Nikolaus carries the record of each and every child. Both good and bad behaviors of every child are written on his golden book.

St. Nikolaus is also known as Kris Kringle in some parts of Germany. The reformation caused a movement in which the tradition of giving and opening gifts was moved to Christmas. This led to the belief that the gifts were brought by the Christkind, which originated Kris Kringle’s name.

In other regions, St. Nicholas is accompanied by Schwarzer Peter or Black Peter, a tiny person carrying a whip. In north west Germany, Santa Claus is followed by Belsnickel, a man dressed in fur.

While Christkind translates to “Christ’s Child”, the Germans do not consider it to be baby Jesus. The Christ Kind is described as a young girl with godlike qualities. In fact, every year a young girl is chosen in Nürnberg to participate in the parade as Christkind. She is dressed in a long white and gold dress, with a crown on her head full of long, blonde, curly hair. The Christkind inaugurates the Christmas market on Friday, right before Advent starts. Apart from this job, Christkind has another 150 official duties to perform, which include visiting old age homes, children’s nurseries and hospitals. Christkind also has to visit other cities and give television and radio interviews.

Apart from that, Christmas markets in Germany also organize nativity scene for the entertainment of visitors. You’ll also find a mouthwatering spread of food, which commonly includes fried fish of fresh bread roll, grilled sausages, and sautéed mushrooms. There is also an unending variety of desserts, confections, sweets and baked goods too.

Sternsinger is another Christmas tradition in Germany. Sternsinger or star singers visit one house to another, singing songs and collecting money for donation from 27th December to 6th January. Four children are a part of the congregation, out of which three children are dressed as three wise men and one carries a star on a stick, which symbolizes the Star of Bethlehem. When they finish, they sign with the chalk on the door of the house. The sign is written in a way that 2017 would be 20*C*M*B*17. It’s also said that washing away the sign would bring bad luck. The sign fades itself by the 6th of January.

Locals of Southern Bavaria celebrate St. Nicholas’ Night in the most exclusive and unique way. Muscular men deck up in demonic costumes, wear furry coats and devilish masks and march from one house to another banging the doors. When they are invited by parents, they frighten unruly children into good behavior. Sometimes, a teenage male can even be dragged by the feet and hands into the open and dunked in the deep snow several times, often to the delight of younger ones.

Goose, rabbit, or carp are often the main course of a German Christmas meal. The main dish is paired with favorite German side dishes and appetizers, such as red cabbage, sausage stuffing and potato dumplings. The most loved Christmas dessert is Stollen, a fruited yeast bread filled with nuts and fruits. The ridge in the center of these breads symbolizes Baby Jesus in swaddling clothes. Lebkuchen and chocolate Santas are other favorite confectioneries of Germans.

The fire tong punch is an absolute must drink during the holiday season in Germany. It’s hot mulled wine with high alcohol content and topped with open flames. The drink made its first appearance ages ago, but the 1943 comedy movie, “Die Feuerzangenbowle” made it popular among the Germans.

The eve of the 6th of December is a very special night in Germany. Kids place a pair of freshly polished boots in front of their bedroom doors in the hope that St. Nicholas and his assistant Knecht Ruprecht will visit their room and leave little gifts in it such as fruits, nuts, chocolates or a bag of gummy bears. 6th of December is also special for parents as they don’t have to coax their children to get out of the bed. They already sneak out of their room to check what St. Nicholas has got for them. But only good and well behaved children get presents from St. Nicholas. Naughty kids get a piece of coal by Knecht Ruprecht.