Hello friends! Are you looking for some quick and easy games to keep the guests entertained during Christmas parties and beyond? Well, then you’re at the perfect place because we’ve got some excellent minute to win it Christmas games for you.

Minute to win it games are best activities for Christmas because even the coy guests get involved in the games without much pestering. The games do not take much time and supplies and bring loads of fun to the gathering. Below we’ve got you 20 fun minute to win it Christmas games to keep the guests entertained at the party.

20 Minute To Win It Christmas Games

This is probably the toughest minute to win it Christmas games and it will surely give a hard time to the players. Tie a piece of twine or ribbon from one chair to another. The participants have to stand on top of the chair and try to be the first one to drop a candy cane and make it land on the ribbon or twine without tumbling it down. The player who successfully lands most candy canes on the ribbon will be the winner.

Before playing this game, ensure that you have plenty of gingerbread man cookies in your kitchen. This game requires a minimum of two participants to play against each other. Begin the game by placing a gingerbread man cookie on the forehead of each player. You need to instruct them to move the gingerbread man cookie down to the mouth using just the head and facial movements. The first player to eat the cookie within a minute will win. If both the players take more than a minute, they’ll be disqualified.

Here’s another awesome way to make use of the large wreaths lying in your house. To play Wreath Relay game, you will need at least two teams comprising of two participants to complete. The hostess has to put a Christmas wreath on the head of a team member. The player will transfer the wreath to his teammate using nothing but their heads. Also, the player will have to travel a certain distance and hang the wreath on the post to win the game. And they have to do all that in one minute. The first player to do it successfully will win.

In this minute to win it Christmas game, players have to pass ornaments or small toys from under their legs, just like they are hiking a football and their teammate has to catch hold of it and place it in the Christmas basket attached to the second player’s back. So you have to divide the participants into teams of two and arrange for plenty of ornaments and small toys. The team that manages to put most numbers of ornaments or toys in another player’s basket within a minute will win the game.

This is one of the best minute to win it Christmas games for kids. To play, you’ll need a ping pong ball, a straw and three nuts from the hardware store. With just 2 players, you can play this game, but we’re sure no one will be able to stop themselves from playing once they see other kids playing. The game is pretty tricky because the kids have to lower the nuts down the straw using the straw as the stem of the lollipop while balancing ping pong ball on top the straw. The idea is to create a Christmas lollipop. The first person to do it minute a minute will win.

You will need a few bags of cotton balls, a large salad spoon, and two large bowls to play this game. Put all the cotton balls in one bowl and put it right next to the empty bowl. Now blindfold the participants, give each of them a spoon and tell them to transfer the balls from one bowl to another. The one who transfers the most snowballs in a minute will win.

Away in the manger is one of the most joyful minute to win Christmas games for groups. Firstly, you need to gather a few stuff, such as various pieces of clothing, stuffed animals and other knick-knacks and arranged in a laundry basket. Divide the participants into teams of four and give each team a minute to use props they like to create their own version of the manger scene or the Nativity. Wouldn’t that be fun? Yes, it might take a bit longer than a minute.

To play this game, you’ll need holiday themed buckets and plastic elves. Line the buckets away at a distance of 5 inches, 10 inches and 10 feet away from the game starting point. You need to give the participants a minute to toss the plastic elves into the baskets. The first player who lands elves in all the three baskets within a minute will win the game.

Snowball Toss is one of the easiest Christmas minute to win it games. Hang a Christmas wreath from the ceiling or doorway using burlap. Give each participant some cotton snowballs or snowballs made out of white socks. There are two versions of this game. In the easy version, the players have to shoot as many snowballs as they can through the wreath in a minute. In the harder version, you need to put a large bowl on the other side of the wreath. The players have to throw the snowballs through the wreath and into the bowl. The one who throws most snowballs successfully will win the game.

For this game, you’ll need red foam nose, reindeer antlers, a 12-inch string, and petroleum jelly. The game can be played with at least 2 or more participants. Apply petroleum jelly on the noses of each participant. Next, you have to attach the nose at the end of one string and tie the string to their collars. Using just their head and body, the players have to try to bring the foam nose towards their own nose. The one who does it fastest or within a minute will win the game. 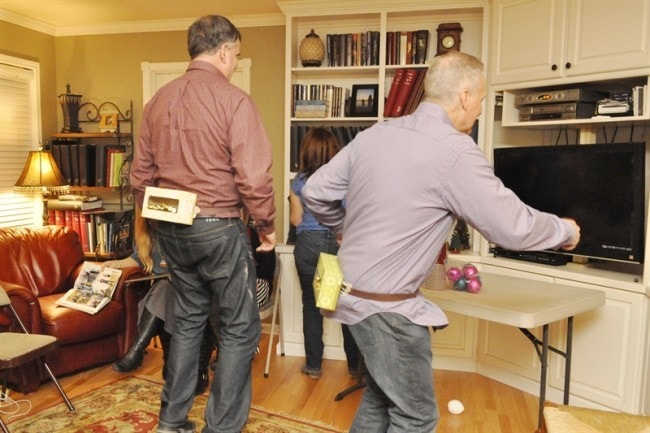 This hilarious game will be a sure shot hit with both kids and adults. To play this game you’ll need some empty tissue boxes, belt or strap, buckle, hot glue gun, and jingle bells. Stick the tissue boxes to the strap or belt and attach a buckle to each belt so that they can adjust to their size. Put 8 jingle bells in each box. The objective of the game is to shake the boxes hard enough so that the bells bounce out of the box. The one who shells out the most bells within a minute will be the winner.

This is one of the most fun minute to win Christmas games for adults. To play this game, you’ll need winter globes and balloons, holiday-themed balloons preferably. The game involves players trying to pop balloons with their hands with the gloves on. The one who manages to pop the most balloons in a minute would win the game. Try to make the gloves as fun as possible, not regular mittens, which makes it pretty easy to hold the balloons.

Here’s another wonderful minute to win Christmas games for adults. You’ll need two candy canes, two plates and 12 bolts that can fit into the candy cane. You need to start with two participants each. Make each player hold plate in one hand and candy cane with bolts slid on it in another hand. The objective of the game is to stack the nuts on top of each other without making them fall. The one who does it within a minute will win the game.

The supplies required for this game include a yardstick, a wrapping paper tube, and 8 ornaments with 8 ornament hooks. In this game, two players have to work together to keep their ornaments hung and balanced on the yardstick so that they don’t tip over. The one who drops it within a minute will the game. If both the parties keep it put, you can extend the game for a few more minutes.