Christmas is just around the corner guys and it’s time for all of you to celebrate!  Many of you must be planning for his special day from months back. Christmas is a special day when lovers unite; friends get to meet each other, relatives dance around the splattering bon fire and it’s a reunion of the heart. Along with good food and entertainment Christmas brings with it a hope- a hope for the next year ahead and thanking the present year for all that it has given us. Many companies as well as organizations plan for Christmas and New Year parties so that people can get to know each other, people from different departments of the same company can associate with each other and the ice which was so long created between lots of people are broken. Office party games not only make your party exciting but also create good relation among colleagues.

Here is a list of games that would definitely help you break the ice and keep you rolling all night. These are some games that we played at our Christmas party and it was definitely a great party for all. So get the party started with these games. 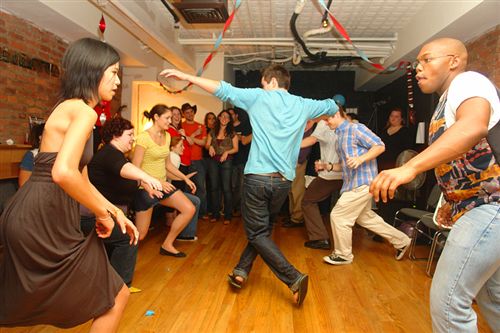 “Santa Claus is coming to town”…You would be given a red Santa Claus hat which you would need to keep on all evening. The hat cannot be removed from your head. If anyone is caught opening the hat or the hat falls from ones head then he would be out!!  The person who be seen wearing the hat whole evening without opening the same for even once would be termed as the winner. Easy huh? Watch out for your heads though.

Christmas party games for work – Playing with better half

This is another great party game idea. Pair two participants and make then stand beside each other. The adjacent wrists need to be tied to each other with a ribbon and then covered with a stocking. Then give them a box, a wrapping paper, a pair of scissor and a cello tape and ask them to wrap a gift in the best possible way. The hand which is tied would be of no good for the couples. Only the free hand can be used. The couple who packs the box neatly wins. Good for love birds to be together!

Two teams would be divided and every participant would be given an inflated balloon. The focus is to put the balloon in between the knees and send it to the other part of the room without dropping it. If the balloon falls down the participant needs to pick it up again and run, and if the balloon bursts then you are already out. The participant would need to put the balloon in the bucket without touching it. It is like a relay race and the team who succeeds to out the maximum number of balloons in the bucket wins. This is one of the favorite Christmas party games for office.

Office Christmas games – The No Game

Prepare a tag which can be easily open and worn. For e.g. paper hanging tags from strings, bells on a string, or colored ribbons. Every guest at the party would be given the tag which they need to wear. The aim of the game is for people to ask other guests questions and they need to try and get a no for an answer. If the player gets a no, the player who has answered with a no has to give his tag to the player. At the end of the day the person with the greatest number of tags win the game.

This can be played with your family as well. In this game you would need to write Christmas related themes that are easy for all to identify. Themes like hamburger, Christmas Carols, Holy pine, peppermint lollipops etc. The cards would be pinned on the participants back. The person would have to guess the theme with just questions that can be answered by yes or no within two minutes. The person who can answer maximum number of question wins.

In this game balloons have to be squeezed together between the player’s chests and it needs to be popped. The pair with the maximum number of popped balloons wins the game. No touching is allowed. Hands should be at the back tied up.

You really need to be a good thief for this game! This game is not only enjoyable but entertaining as well. Steal one product from the desk of each person and then display those items during the party. Everyone needs to recognize their items and then take it back. This is an interesting game which can brighten up the party mood. Know your things well though!

Write well known quotes from well known movies. Cut up all the quotes and then shuffle them and out them in a jar. Players would be taking turns to read out each quotation and everyone needs to guess the movie name. Whoever guesses the most number of names wins. Also guess names of actors and actresses for extra points. Great game for movie buffs!

Everyone would have to work in pairs to track down items that would be provided in a list. Every team would have a digital camera. Decide which items each pair would be looking for and set a time and a distance limit as well. The fastest couple who would be able to track down all the items would win the game.

Hungry are you? Write down different ingredients of a hamburger in each note and then tape each note in the back of each player. The players would need to accumulate themselves sequentially in the order that the hamburger was made. For more excitement you can divide two teams with two food products and the first team who finishes first wins the game.

Every participant gets a piece of paper. There would be one with D for detective, M for murderer and the rest all V for victim. The aim of the game is that the detective must find the murder that starts killing victims by giving their targets a wink. The murdered would be secret to all. If you are a victim you need to die at the wink. If the murderer is found the game ends. The fastest detective who finds the murderer wins.

Everyone needs to stand in a circle and each takes turns to say Ha Ha ,He He and Ho Ho.This has to be done really seriously. If anyone starts laughing during the game, he would be termed out. The person who is left out at last wins the game.

Be sure to know the rules before starting the game. One person would be chosen to be the statue. When the party is on, this person suddenly turns into a statue in the middle of whatever is going on. As people start noticing the statue they would also have to turn to a statue. The person who is the last one left to be the statue wins the game.

The aim of this game is to construct a Christmas tree out of construction paper. The person who makes the best tree wins the game. Are there any conditions? Definitely yes! The player needs to use only his hands in order to make the tree. After the tree is finished hand it with a thread so that it can be judged.

At the end of the day all of you can just crowd up and sing Christmas carols to sprite up the mood. The one who sings the best carol wins the game.

In order to make games exciting you can also plan for little gifts.  This would encourage the participants to play more.

If you are in charge of planning for Christmas games there are varieties of games that can also be found online. You can select from these games and list then down. If you are creative, you can also try out your own Christmas games which might be fun! The Christmas party game ideas which are listed in this article are just a few common ones that can be played by all. Many of these games are replicates of other games. Regardless of any kind of Christmas games that you play, the main aim is to get together and have fun and create memories which you can definitely cherish for life!  Next time after Christmas when you see your colleague you just do not walk away but slap him in the back and say “Hey Buddy” great party.

So there you are with some of the most exciting and enjoyable games. Merry Christmas and enjoy your new year ahead!!