Whether it’s children or adults, everyone enjoys a fun party game, especially at Christmas gatherings. Games are basically the best way to encourage the kids and even adults to mingle with each other and help them involve in activities together. All you need to do it pick the perfect game, based on your party theme, the age of the guests and the dynamics of the group. So whether you’re organizing a family gathering or just wish to beat the boredom of the holiday season, below we’ve got you 30 amazing family Christmas party games that will get everyone in the spirit.

In this game, you need to pick one player, who will also be the answerer. He would select a Christmas theme in his mind, but shouldn’t reveal it to the other players. The players will then ask the answerer questions, which would be answered either by a ‘Yes’ or a ‘No’. If the 20 questions asked by the players fail to find the answer, the answerer will get another round, and this time with a new theme in mind.

Tip: The answerer can confuse the contestants by picking out difficult Christmas objects and the questioners can get it right by asking questions that narrow down every possibility to guess the object.

This game is basically the Christmas version of Spoons. The main aim of the players should be to be the first one to get the four of a kind. To play this game, you need to first select a dealer and make him pass out four cards to each of the participants. If you have 5 participants, leaving the dealer, you need to put four candy canes in the middle. The dealer will keep giving out the cards until one of the players gets four of a kind. The same player will take one candy cane and leave. Now the remaining 3 players will try to get their hands on the remaining candy ones.

Prepare a list of your favorite Christmas carols on a game card and divide the players into teams. One member from each team will take out a card and draw its illustration to his team members within a minute. If the team guesses the carol correctly, they will get one point.

This one of the most fun family Christmas games as it involves decorating a family member as a tree and in return, giving plenty of photographic opportunities for everyone present. The game calls for at least 3 representatives who have to serve as the figurative Christmas trees. The teams will gather around their respective family tree representative and decorate them with different Christmas decorations provided by the host. Some fun props to give would be oversized green fabrics and cute paper baubles to turn the humans into trees. The best human Christmas tree would win the game. 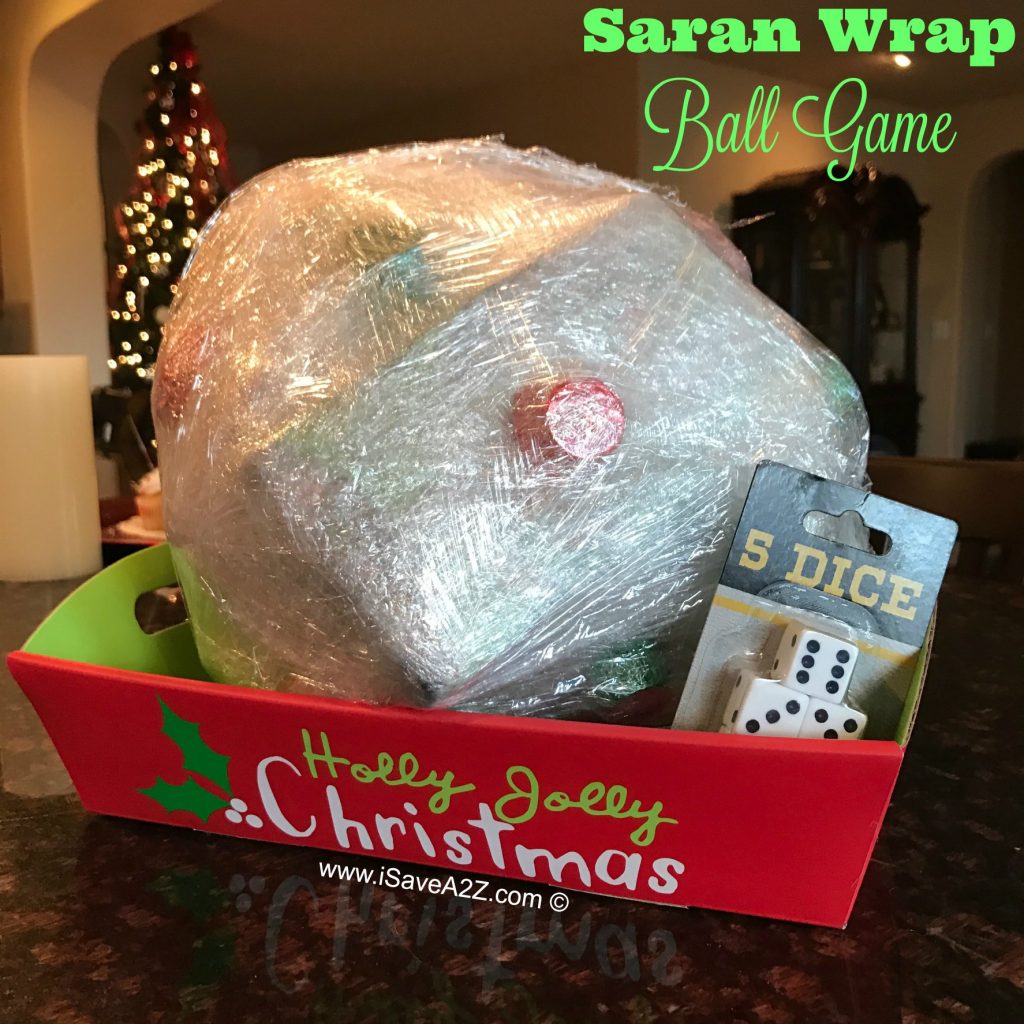 Here’s a supremely fun Christmas game that you can play with your family. Called the Saran Wrap Ball, this game involves a huge ball of Saran Wrap layered with tons of goodies and a surprise gift in the center. Now the responsibility of making the Saran Wrap ball lies on you so you need to be as creative as you can while picking the gifts. Now, the first participant with the ball will unwrap it while the other person rolls the dice, trying to get doubles. Once they get the doubles, the ball has to be passed to the next player, who will continue to unwrap until they get a double. This will create the suspense of the game. The best thing about this game is that the participants will get to keep the treasures they unwrap along the way. The participant who unwraps the last section will win the mega prize.

There could be no perfect game for families during Christmas than bingo. Bingo, in itself, is a timeless game that never gets old, but if you want, you can make some new traditions this year to keep the kids hooked. For instance, you can use Hershey’s Kisses chocolates for the game pieces, and we’re sure there won’t be any complaints from anyone. You can easily get printable Bingo templates from the Internet. Or, you can create your own Bingo templates, filled with your traditions. Believe us, it’s not that difficult. 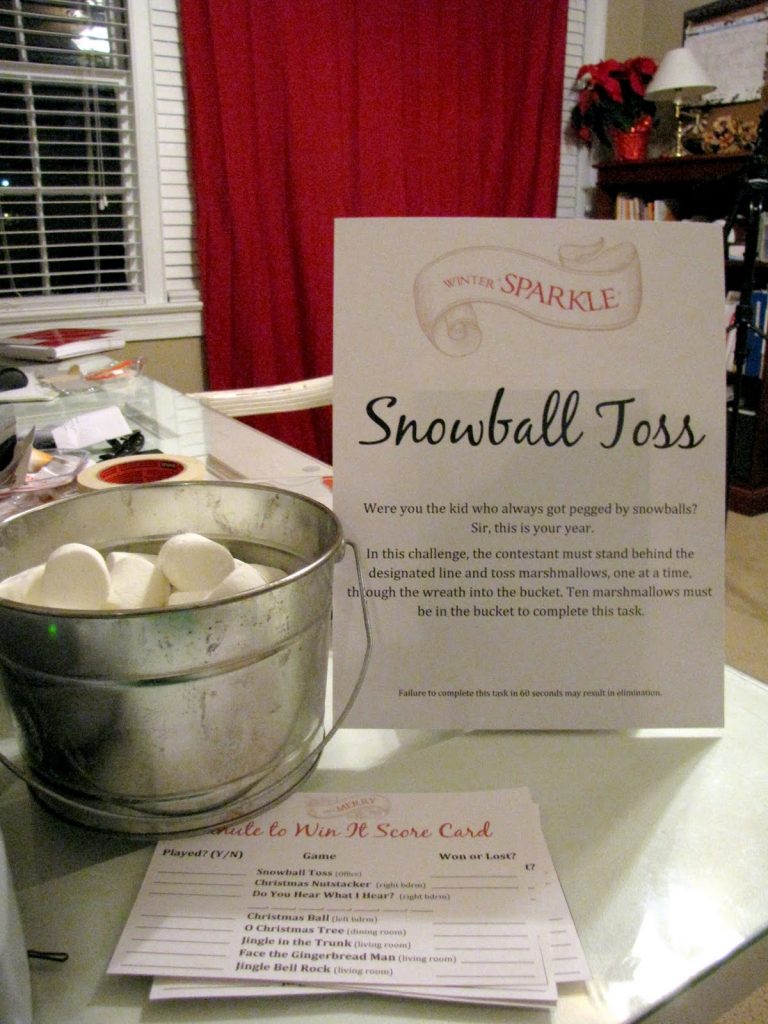 Snowball toss would also make a fun family game for Christmas. You need a few packets of big marshmallows, a wreath, and a bucket. To play the game, the participants need to stand behind a designated line and toss the marshmallows one at a time into the bucket through the wreath. There need to be ten marshmallows in the bucket to complete the task. And failing to complete this task in 60 seconds would result in the elimination of the participant.

If snowmen make you and your children happy, you’re surely going to love this game. It’s a pretty simple game, but will definitely let everyone in your house rolling on the floor, laughing. You’ll need paper plates and markers (not pencils or pens) for this game. To play the game, the host will tell the players to hold the paper plate on their heads. With paper plates in one hand and marker on the other, the participants have to draw the snowman while you give out a series of instructions. The instructions include:

The snowman slam game is very easy to put together and will bring loads of fun to you and your kids. The best part about this game is that most of the materials required would already be on hand. Firstly, you need to make snowmen by decorating white cups as snowmen using black and orange craft foam. For the snowballs, you can use three white socks tightly balled up. For the game, the participants just have to toss the snowballs to knock down the snowmen. 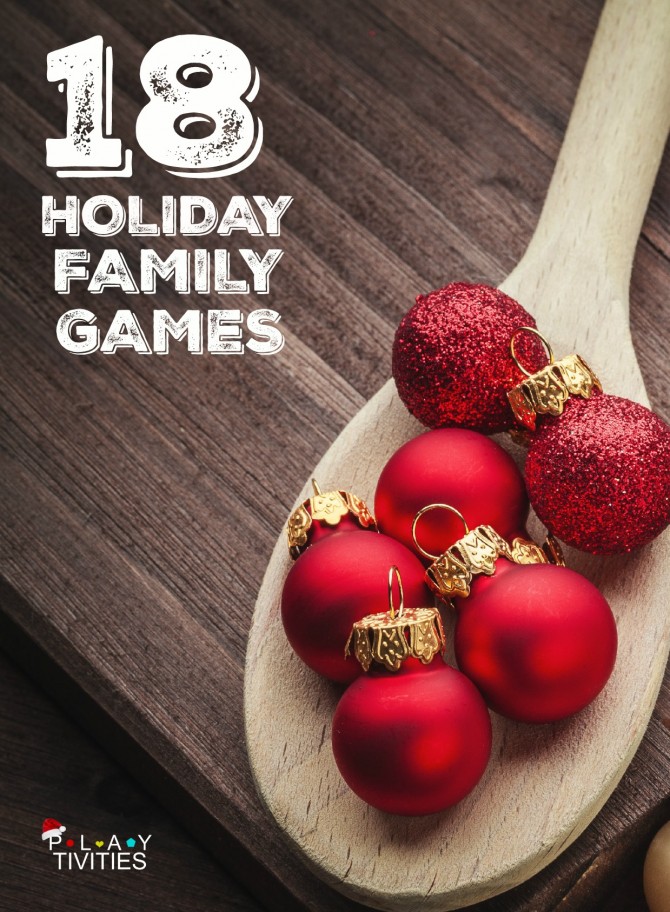 Firstly, you need to divide the number of participants into teams consisting of four people. For instance, if you have 24 people, divide them into 6 teams. Next, you have to set up a relay course, which must include obstacles as well. The first person from the team will put the ornament on their spoon, walk around the course and come back and hand over the spoon to the next person on their team. The catch here is that they cannot use their hands while passing off the ornament. And if the player drops the ornament, then he’ll have to go through the course again. The team that manages to get all of their four players around the course will win the game.

This simple indoor game will have everyone enjoying the snow without having to go out. Basically, the participants have to race against time to compete and win this snow shovel race. Divide the participants into several teams and select one snow shoveler from each of the teams. The snow shoveler has to shovel a pile of snow into the bowl within one minute. You can use cotton balls for the snow and a spoon for the shovel. Don’t forget to give each team a bowl to put their snow. For the scoring, you can give 5 points to the team that finishes the challenge within 1 minute, and if no one completes the challenge, you can give 4 points to the team that has most cotton balls in their bowl. 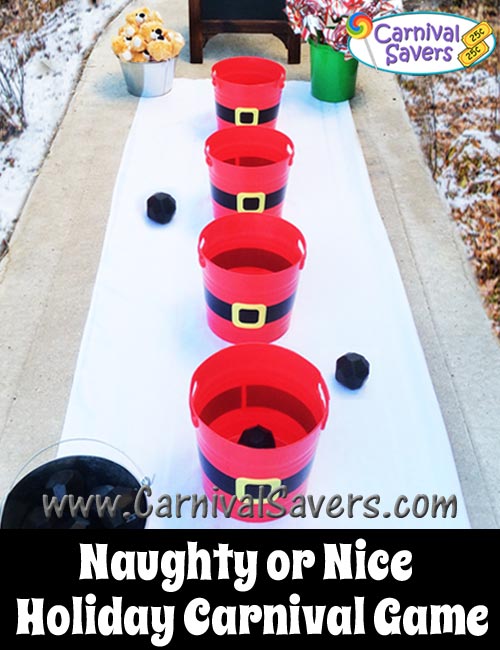 The game Naughty or Nice is perfect for Christmas carnival or party. To play this game, first and foremost, you’ll need 4 Santa theme buckets, which you can easily make at home, 8 to 12 coal toys and stand to put behind the lines. Don’t forget the prizes, including consolation prizes. Next, you have to set up the game as shown in the picture above. Just ensure to put the Santa buckets around 6 to 8 inches apart to make the game challenging. Now, give each participant 4 lumps of coal toys, which they have to toss into the buckets. They have to start with the closest bucket first and then try to toss it in every bucket in order. If they miss a bucket, they’ll have to try to hit into the same bucket again.

Brace yourself for a night of fun with this incredible snowman dice game. Yes, it does require a few preliminary preparations, but believe us, it won’t take much of your time. You just have to download the template and arrange for the dices. The rules of the game are pretty simple. The players have to roll the dice and put the corresponding piece to the snowman’s body. The first player to build the snowman will win the match. The game sounds easy, but you’ll realize that it can make you sweat only when you play it.

We’ve been Elfed game is basically the holiday version of the popular Halloween Boo game. The game will be started by one of the neighbors, who will secretly leave a basket of treats, along with an Elf sign and an Elf poem, which will also be the instruction to play the game. The most fun part of the game is ringing the doorbell and running. In turn, each of the players would be asked to post the sign to alert all the would be Elves that they have been Elf-ed. They even have the responsibility of passing the game to two more neighbors or friends. When the days have passed, you’ll be pleasantly surprised to notice the Elf signs pop all over. This will even help spread holiday cheer from door to door.

The Candy cane hunt is one of the most popular games with the kids, so we highly encourage you to include it in your list. The host or elders of the family have to hide 16 candy canes, in the playroom and living room. You can put some in places more accessible and some cleverly hidden. Hand holiday-themed bags to the kids and ask them to hunt for the candy canes. You can even assign a time limit, say one hour. Or if you have just one child playing, you can give him the liberty to look for the candy canes all morning long. It’s an excellent game for preschoolers, especially, as it will hone their critical thinking, math, and problem-solving skills.